Unforgiven | Recommended Film Of The Week

Recently turned nonagenarian Hollywood legend Clint Eastwood can be a problematic figure to process, both in the political sphere and in terms of his filmmaking as a star and director.

A true movie star as well as a consummately skilled, versatile and prolific filmmaker, Eastwood has directed some of the most powerful mainstream American films of the past few decades, working in just about every conceivable genre.  But Eastwood's public presence, politics and the politics of his films can also be quite difficult to stomach.  They can be contradictory, strange, or even sometimes tricky to quite pin down at all.  Even now, for every Trump endorsement or imaginary Obama chair address, there is another humane and intelligent film with his name on it, another hymn to fairness and dignity in American life, delivered like clockwork every year to cinemas.

Lending his stoic, charismatic and ultra-macho screen presence to some of the most bloodthirsty and reactionary revenge fantasies of the 1970s and 1980s, Eastwood took a place behind the camera to helm many similar films throughout that period.  From his directorial debut, the psycho-thriller Play Misty For Me (1971), via violent action films, police thrillers and brutal Westerns, Eastwood often appeared in front of the camera as well, taking on the role of the ruthless soldier, tough cop or avenging cowboy with ease.  In this period Eastwood drew on the influence of his regular collaborators Don Siegel and Sergio Leone in his direction, with a tough and stylish approach to no-nonsense genre filmmaking.  He honed a canny knack for building tension, constructing striking cinematic compositions and eliciting strong performances from his casts. 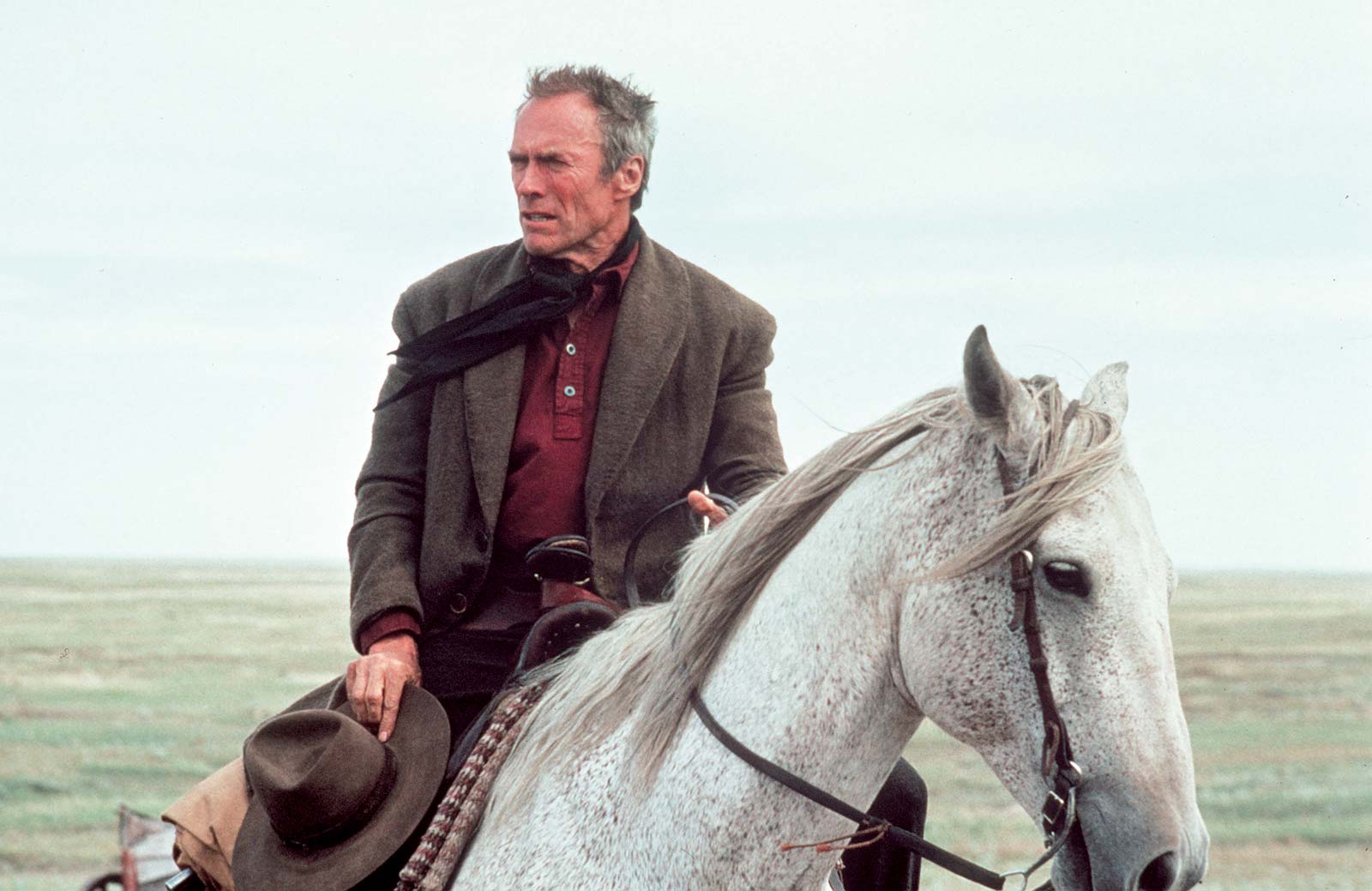 So many of these Eastwood-directed films also rely on a polarising and simplistic moral worldview in their storytelling and adopt hysterically conservative stances to, well, just about everything, can be troubling when viewed now, particularly when considering contemporaneous developments within their respective genres.  It can be bracing to watch, for example, some of the best Revisionist Hollywood Westerns of the 1970s, films which actively queried the tropes of the Classical Western and the telling of American history - from Soldier Blue (1970) and Little Big Man (1970) to Ulzana's Raid (1972) and Heaven's Gate (1980) - in the context of the tough guy heroics on display in Eastwood's Westerns High Plains Drifter (1973), The Outlaw Josey Wales (1976) and Pale Rider (1985).  Here are films in which personal wrongs inflicted upon our hero are invariably and swiftly resolved with the application of a bit of the old ultraviolence.

Having mellowed out somewhat by the late 1980s, and commenced his mid-period knack for rendering superb, classical prestige pictures with his biopic Bird (1988), Eastwood's attention turned inward in 1992 with his own Revisionist Western Unforgiven.  Perhaps his finest film as a director, and certainly a showcase for his most nuanced and interesting star performance, Unforgiven is a tough, upsetting but beautiful watch, one which functions both as a standalone Western in its own right, and as a powerfully introspective retort to Eastwood's own Westerns as director and star, perhaps even to his entire filmography to date. 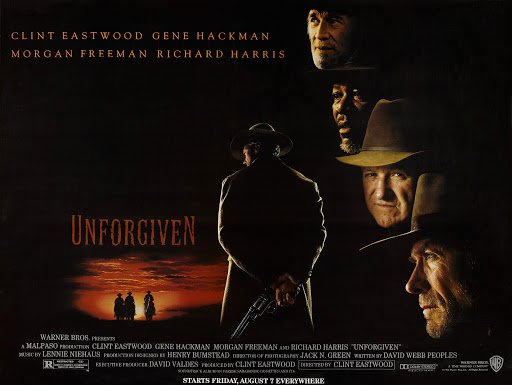 Eastwood plays widowed gunslinger William Munny, who is coaxed out of a poverty-stricken retirement working a farm with his two young children, by the possibility of a handsome reward for dispatching two brutal cowboys who have attacked and mutilated Delilah Fitzgerald, a prostitute in the nearby town of Big Whisky. The town is ruled over by a sadistic sheriff Little Bill (Gene Hackman) who is also perversely protective of Munny's two targets.  Navigating various detours involving savage gunmen and lawmen, including Richard Harris' unforgettable cameo as the vain, cowardly assassin, English Bob and Morgan Freeman as Munny's loyal old partner Ned Logan, the film moves inevitably towards a violent showdown with the entire town.

It's a conventional Western story certainly, full of elegiac journeys across vast empty landscapes, confrontations in tough frontier towns and vicious gunfights.  But what differentiates Unforgiven is its sly approach to all these common Western tropes.  The landscape may be beautiful, certainly, and the divine widescreen cinematography seems to relish in the simple pleasure of beautiful image-making.  But the characters here are shabby and morally compromised.  'Legendary gunslingers' reveal themselves to be cold-blooded murderers in the heat of violence, they show themselves up as manufacturers of their own legends.  Indeed, almost everyone in the film is motivated by mercenary self-interest over moral righteousness, an idea totally at odds with the mythic grandeur of the Classical Western, and indeed the tough guy heroics of Eastwood's own filmography. 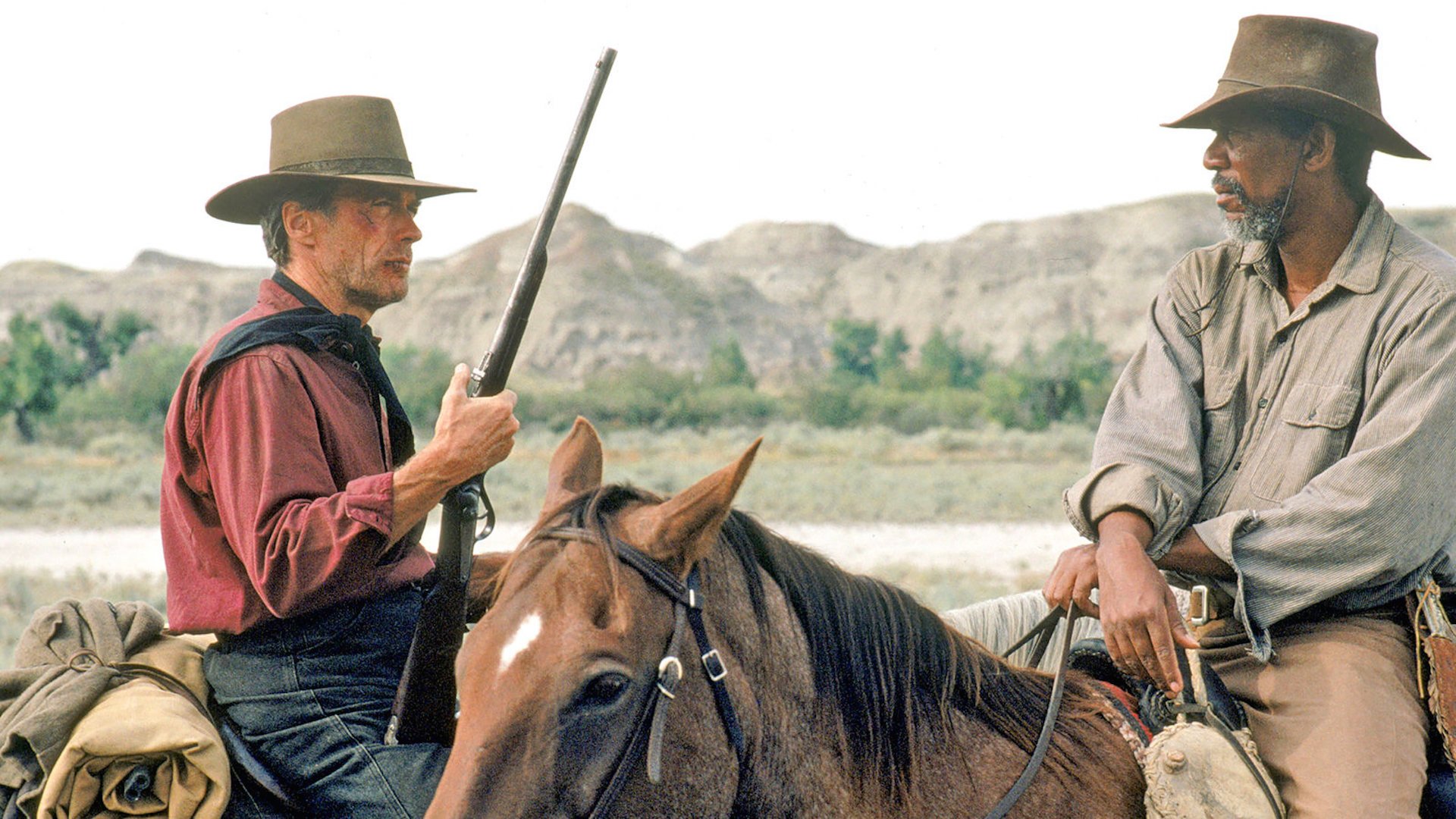 It's a Western which also affords its female characters a degree of dignity, nuanced characterisation and screentime unusual in the genre, and one in which the actions of women propel the narrative forward.  Here, instead of a story of revenge, redemption or frontier derring-do, we are presented with a perverse, ugly world in which the forces of law conspire, corrupt and brutalise.  What little hope is to be found in simple, fleeting moments of kindness between characters, such as Munny's beautiful and touching exchange with Delilah Fitzgerald late in the film.  Scenes like this are a very far cry from the dynamics of Eastwood's previous Westerns, feeling as though they fill gaps left in those films with welcome shades of grey and real humanity.  Characters are also afforded moments of healthy introspection, as Munny and Ned reflect on their shared past together by the campfire, or English Bob is confronted with the reality of the tall tales he peddles in cheap paperbacks, whilst locked up in the Big Whisky jailhouse.

Eastwood has made and starred in many films since, good and not so good.  But it is perhaps Unforgiven, which won Oscars for Best Picture, Director and Best Supporting Actor for Hackman in 1993, that remains the most rich and worth revisiting.  The film has not lost its power to shock, to move and to confront, and for that, it is worth rewatching as soon as possible in these extraordinary times. 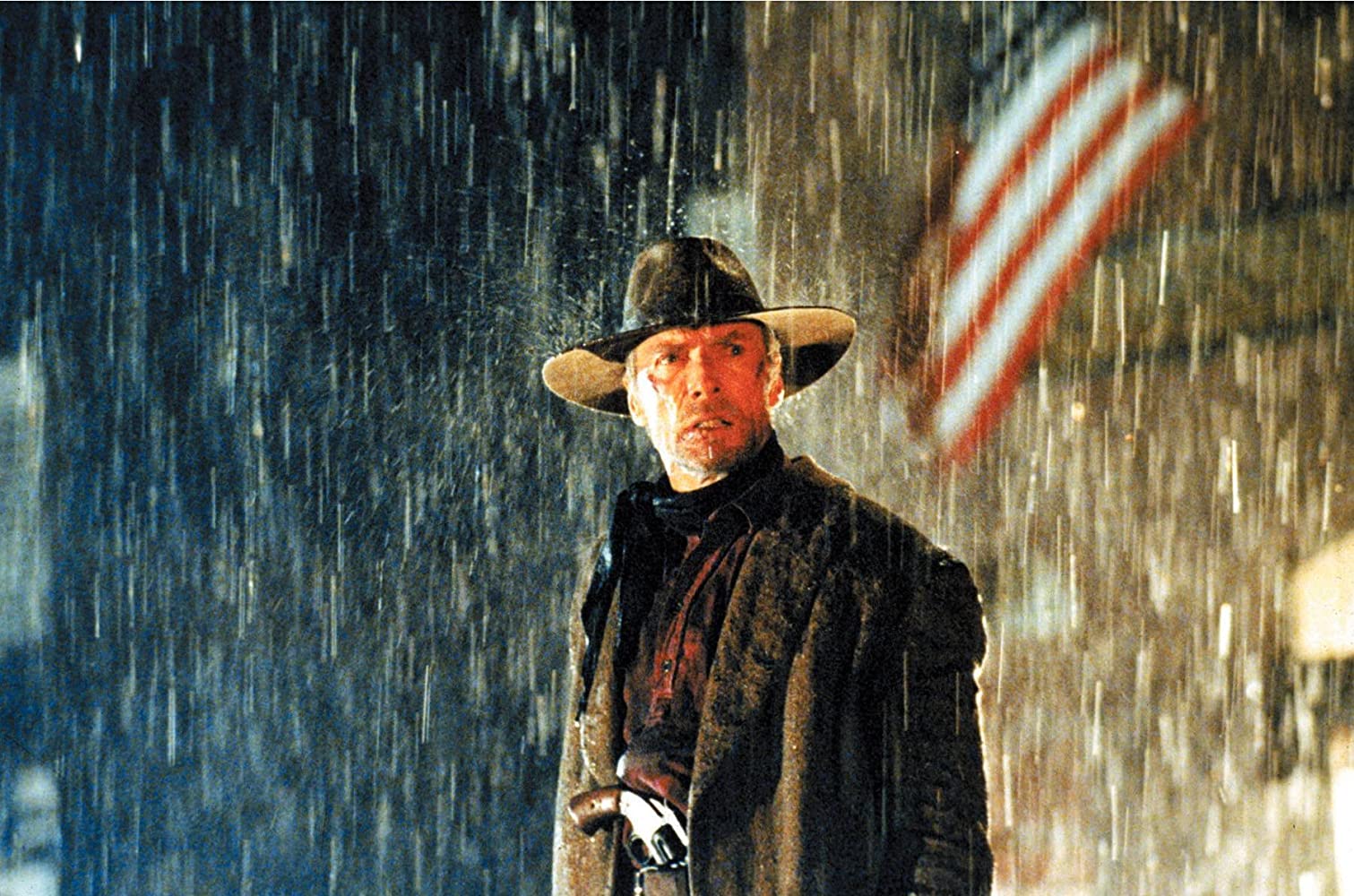 Cast & Crew on the making of Queen & Slim | Interview

Picturehouse News brings you all the 'must-sees' and 'must book for's' so you need never miss a thing.

We are thrilled to announce that the Cameo in Edinburgh has now reopened.

Winocour finds a perfect and productive balance between moments of tenderness and those of explosive violence.

Nadine Labaki, What Are You Watching? | Interview

The Rise Of Outdoor Cinema

Picturehouse is spreading its wings, with plans to screen outdoors at new pop-up sites in Edinburgh, York and Chester, as well as returning to ones in Bath, Henley, Norwich and Southampton.