We asked, you answered: count down our Top 10 films of the year as voted by you, our Members

Cinema is properly, actually, really back. Really really. In 2022 we've had everything from bonafide blockbusters to breakout arthouse hits – and to top it all off, we're ending the year with a new Avatar movie. Welcome back, big screen.

But with all this greatness to explore, we asked our most trusted resource – our wonderful Members! – to tell us their favourites, and we heard back from over a thousand of them to compile this wonderfully wide-ranging list. You'll find fighter pilots, maladroit millennials, rock stars, rough seas, and, er, hot dog fingers? Grab your popcorn, turn your phone off, and let's delve in.

A Hitchcock noir for the iPhone generation, Park Chan-wook makes a glorious return to the big screen with the thrilling Decision To Leave, a thoroughly gripping (and swooningly romantic) story of a detective beguiled by the widow of a man who died in a mysterious mountaineering accident. Or, as the question always is, did he?

As a member from Arts Cambridge put it, it's "a thoroughly modern crime drama with all the romantic sensibilities of Old Hollywood", with two impeccable leads in Tang Wei and Park Hae-il who delight in their cat-and-mouse love story.

Cast your mind back to the very first week of January – and, equally, to the 1970s – and you'll find Paul Thomas Anderson's latest kicking back under the California sun. A free-wheeling, nostalgic hangout movie making stars of its two lovelorn leads (Cooper Hoffman, son of the late, great Philip Seymour Hoffman, and HAIM's Alana Haim), Licorice Pizza was the perfect way to defeat the January blues.

Gene from West Norwood summed it up nicely, saying "it transports you to a time that you may well have no experience of, but manages to give you a sense of nostalgia and a longing to be there in the moment with these kids." But more than anything? "You had me at PTA, to be honest."

The rumours are true: Elvis has entered the building. It's hard to argue there's anyone better to capture the King than Baz Luhrmann, who may as well have been in a bedazzled jumpsuit behind the camera, bringing spectacular, live-wire electricity to the rise and fall of a rock and roll legend.

Perhaps above all, Elvis boasts an absolute barn burner of a performance from Austin Butler, embodying Presley in every song, every glance and every hip-swivel. A Member from City Screen in York nails it, remarking that "at times you couldn't distinguish the real Elvis footage from his footage. A brilliant film, and a great homage."

Words like 'biting', 'shocking', 'sharp' and 'intelligent' came up a lot in our ballots for Ruben Ostlund's Palme d'Or-winning satire, following a cast of characters aboard a cruise ship populated by the super-rich. But one reigned above all: 'hilarious'.

Triangle of Sadness doesn't shy away from leaning into the grotesque as its cruise-goers wind up on the wrong end of some extremely rough seas. Still, it's all the better for it – as Duke of York Member Jamie tells us, "To say I was captivated from start to finish would be an understatement. My eyes were wide open, and a smile was fixed on my face throughout." All aboard.

If Triangle of Sadness is defined by making our Members laugh the most this year, Charlotte Wells' poignant debut Aftersun is the opposite: this deceptively simple story of a father and daughter on holiday in the '90s is guaranteed to have you drying your eyes in your seat (and probably even after you leave the screen).

Cameo Member Kate was "spellbound throughout the whole film – it's beautifully understated yet packs a deep emotional punch. The acting by Paul Mescal and Frankie Corio was superbly realistic, and the story was magical and truthful at the same time. I rarely want to see a film more than once, but this film is that rare exception."

5. The Worst Person In The World

Renate Reinsve's Julie doesn't know what she wants – from romance, from work, from almost anything at all. Maybe a haircut will help? The third in director Joachim Trier's 'Oslo Trilogy', The Worst Person In The World takes her troubles seriously, stripping back the artifice of Instagram-friendly life to craft a sympathetic, affecting and innovative coming-of-age tale.

Ritzy Member Ross says "I've rarely seen a film capture the feelings that so many of us have in our thirties as well as it does" – because really, who doesn't feel like they're the worst person in the world sometimes?

It's no small feat to attempt to follow in the footsteps of Akira Kurosawa. But the Japanese filmmaking master's Ikiru is paid perfect homage in Living, with director Oliver Hermanus and writer Kazuo Ishiguro seamlessly transporting his tale of a civil servant grappling with a sudden diagnosis and finding a new lease on life to post-war London.

But alongside Ishiguro's keen adaptation and some gorgeous film cinematography, Living's secret weapon is none other than Bill Nighy, giving a career-best performance in a role that Central Member Sue feels as if he "had been waiting all his acting life to play." It's homegrown cinema at its very best.

The wait couldn't have been longer for this hotly-anticipated sequel, and questions abound: Can they pull it off? Surely they can't match the original? Is that ACTUALLY Tom Cruise in that plane? The answer to all of them was a fist-pumping, full-throttle 'yes', and Top Gun: Maverick proved to be the biggest and most welcome surprise of the year.

Central Member Ben captures it perfectly: "It feels like the film itself is a finely tuned fighter jet, and works absolutely perfectly on a big giant screen. It could have so easily been phoned in, and it wasn't. Like catching lightning in a bottle."

2. The Banshees of Inisherin

"How's the despair?" Brendan Gleeson is asked, halfway through his friendship breakup with Colin Farrell in Martin McDonagh's perfectly dark comedy. Maybe if there was a cinema on the island of Inisherin, it'd be alleviated a little.

"Simultaneously the saddest and funniest film of the year" according to Cameo Member Matthew, The Banshees of Inisherin is a "perfectly crafted and acted modern folk tale, filled with warm, relatable characters, even despite all the despair.  A film that makes you feel you have grown as a person watching it."

1. Everything Everywhere All At Once

No other film this year has inspired such an impassioned response from our Members – we aren't kidding when we say we received several (several!) paragraphs of adulation for the bonkers brilliance of Daniel Kwan and Daniel Scheinert's Everything Everywhere All At Once, their very own multiverse of madness. When we say this film has everything, we really mean it: martial arts, mother-daughter bonding, laughter, tears, talking rocks with googly eyes, Jamie Lee Curtis with sausage fingers, and the truth of how hard it is to do your taxes (especially when you're busy saving the universe).

But what it really has is heart, and lots of it: with three incredible performances from Michelle Yeoh, Ke Huy Quan and Stephanie Hsu at the centre of its everything bagel, the film brilliantly takes the truth of complicated family dynamics and spins them out into a smorgasbord of wonderment.

As Alexander, a Member at Arts in Cambridge puts it, EEAAO is "a reminder that even in the middle of all the cruel chaos of life, there is hope, and that hope is other people." A perfect note to end our year on.

And a note from our champions... 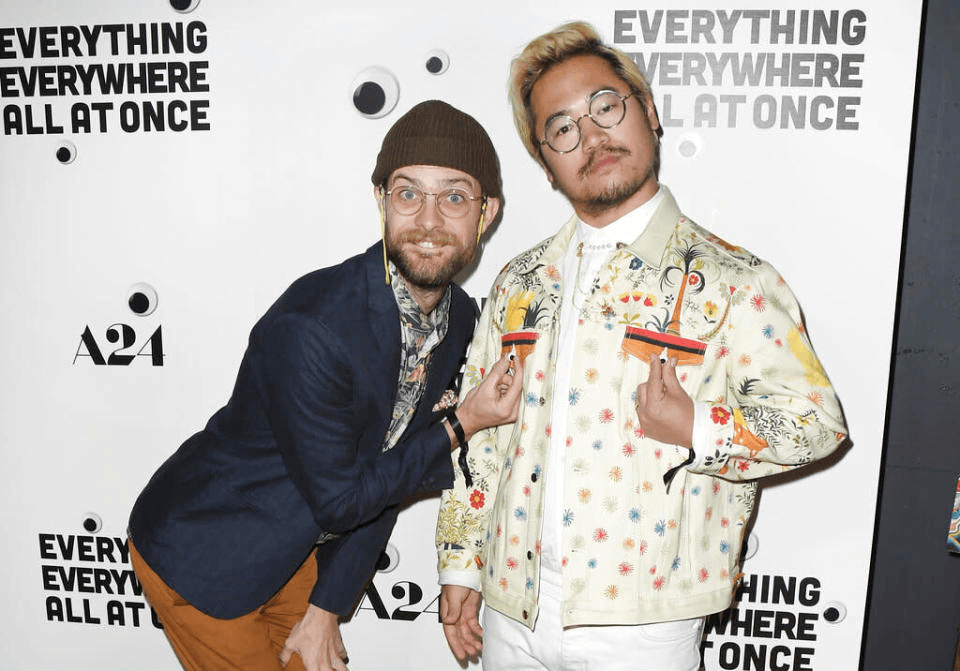 Thank you for voting for our film to be the favorite of the year, you have made these two Daniels very happy today. This is especially meaningful as the UK has always felt like a second home for our creative careers, starting all the way back when we directed our first advertisement (notably, for Weetabix) over 10 years ago. We're so grateful for the film and music video community in London for always being so supportive of our strange brand of filmmaking over the years. From our entire cast and crew, a big thank you for choosing our film as your favorite of the year!

Daniel Kwan & Daniel Scheinert (Daniels), writer-directors of Everything Everywhere All At Once

More on the Picturehouse podcast

Join the Picturehouse team for a very special 2022 year-in-review episode, where we discuss the lists made by our Members (and us!).

Join us for The Nettle Dress as part of our Picturehouse Green Screen film tour, kicking off with The Little on 1 March.

Be our Valentine? This February, find a silver-screen romance, a so-cool cult classic, and even something for when you'd prefer to laugh instead of swoon.

Eating Our Way To Extinction with Greener Henley | Green Screen

In celebration of Veganuary, the Regal in conjunction with Greener Henley is very excited to host a Picturehouse Green Screen of Eating Our Way To Extinction on Tuesday 31 January at 18.20.

Dementia Friendly Screenings are open for all, but are thought for people with dementia and their family, friends, and carers. Join us for free tea, coffee, and biscuits, and a chance to socialise for 30 minutes before the film. The film will start at the time stated.

Daydreams and Nightmares in Weimar Cinema

In this essay, Picturehouse programmer Rose Butler gives an introduction to our latest reDiscover season, and explores precisely what made Weimar-era cinema so revolutionary.

A season of Monochrome visions from a trailblazing era of German filmmaking.