One of the very first films to play at our flagship venue Picturehouse Central in London's West End, Bill Pohlad's 2015 feature Love & Mercy is ostensibly a biopic of Beach Boys co-founder and leader Brian Wilson.  But it's a fittingly strange generic beast, just as subtly melancholic and sad as any of the Beach Boys' deceptively upbeat ballads.  The film at once embraces and problematises the tropes of the cinematic biopic, giving us an impressionistic and echo-filled viewpoint on two key moments in the musician's troubled life, rather than attempting to cover the entirety of a long and varied career.

Paul Dano and John Cusack both play Wilson beautifully at different points in time.  Dano is fresh-faced, ticcy and nervous as Wilson at the beginnings and peak of fame in the 1960s, fronting a band famed for its poppy singles.  Here the filmmaking style is lithe and energetic.  Costumes and sets pop with colour and the blissful music of Pet Sounds during its creation - replete with eccentric sonic components brought to vivid life in dramatised studio sessions - give the scenes a mood of optimism and playfulness, even as Wilson's psychological issues begin to subtly emerge.

Cusack meanwhile plays Wilson towards the end of the 1980s, strung out on drugs and over-medicated, dealing with the machinations of manipulative guru and legal guardian Dr Eugene Landy (played with delicious menace by Paul Giamatti).  It's a world pretty far removed from the energetic music-making of the 60s sections, and the more low-key, greyer film style echoes this loss of energy.  In this segment, Wilson's burgeoning relationship with car saleswoman Melinda Ledbetter (Elizabeth Banks) prompts him to question his relationship with Landy, as he emerges from a drug-fuelled stupor to realise the extent to which he is being manipulated and conned out of his fortune. 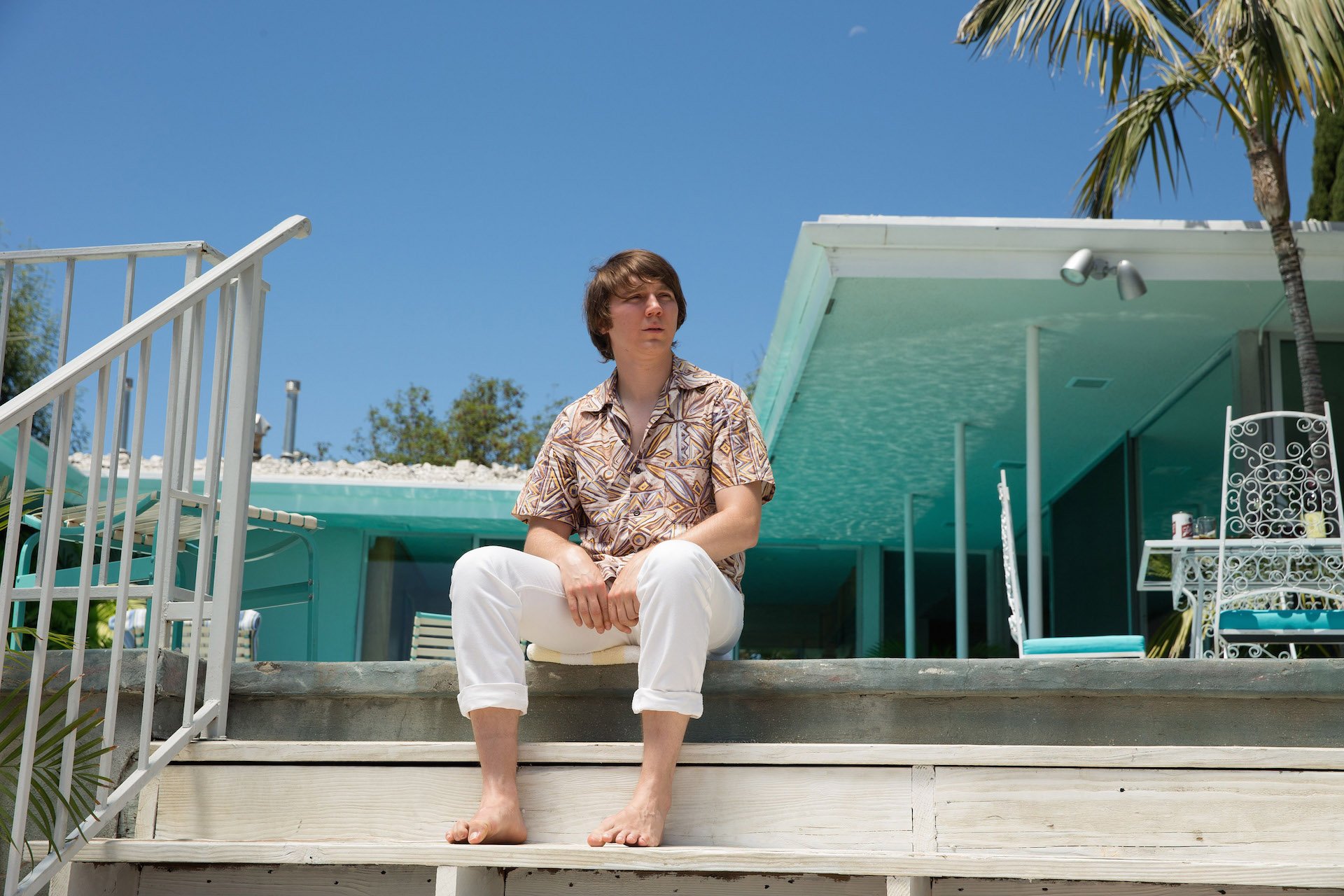 There's an interesting mirroring here, between Wilson's discovery of his father's financial misdeeds involving the Beach Boys song rights in the 1960s scenes, and the slow discovery of Landy's manipulation in the 1980s segments.  By cleverly interlinking these two stories through cross-cutting, the film brings out these parallels in the story as well as the different aesthetic approach.  Pohlad draws out the theme of artistic vulnerability, money and exploitation inherent to this story of a musical genius, but a deeply vulnerable person exploited at every turn for his talent, success and wealth by those around him.

Here is a thematically rich film full of ambiguity towards its subject.  It is a film as much about Wilson and his music, as it is a kind of metatextual critique of biopics and more broadly the industries which depend on the skill and vulnerability of artists for profit.  By moving back and forth between a kind of hyper-generic, visual fetishisation of 60s cool, poppy music and nostalgia in the 60s sections, and the disturbing reality of Wilson in the 80s, the film never allows itself to settle into the groove of the traditional musical biopic.  It always fronts the human cost of fame and manipulation, so often a footnote in these types of films.

This is essential viewing of course for anyone interested in Wilson and his music, but also a film which gestures outwards to an entire genre of films which fetishise their subjects while paying little attention to their lived realities, often as disturbing and bleak as any horror film.  Thankfully there is lightness to be found, the film ending on a note of hope and optimism which is itself quietly devastating in its power.

Competition | Win A Once Upon A Time...In Hollywood Collectors Edition

To celebrate the release of Once Upon A Time...In Hollywood we've got one Limited Edition 4k Ultra HD™ Collector’s Edition to give away and two Steel Books. Enter now!

Competition | Win a copy of The Mysteries of Cinema

We've teamed up with Thames & Hudson, to give away a copy of their brand new book, The Mysteries of Cinema, to one lucky winner.

Help us celebrate as Ashford turns 1 on Saturday 14 December, when tickets will be £5 all day, and if you're a member it's just £3.

Let us know what you think of our new website

You may have noticed that picturehouse.com has changed. We hope you like it! The new website offers a fresh, new design and will make booking easier than ever before.

What makes Blindspotting essential viewing is the way it overthrows the classic cinematic trope that shows friendship as a solution to racism.