The police shooting of unarmed African American citizen Oscar Grant at an Oakland train station in the early hours of New Year's Day 2009 sparked a wave of public outrage and protests in the US.  This was due in no small part to the free availability and distribution of multiple phone-shot videos circulating in the hours and days after the incident took place, images seen by thousands of eyes online and on television.  These videos, like so many that have come since, brought to vivid life a violent reality, one which might otherwise have just been set down as another statistic or unfortunate tragedy painted in the most detached manner on TV news.

Ryan Coogler's 2013 debut Fruitvale Station begins with a clip of just one of these videos, prefacing this beautifully simple narrative film exploration of the last few hours of Grant's life with a note of harrowing documentary realism.  Coogler concludes the film with a shot of Grant's real life daughter, Tatiana, at a memorial for her father some years after the incident, thus bookending his film with the very real, human reality of the story we have seen and providing a painful continuity to this tragedy.  The repercussions of which extended well beyond the events of that night and the public protest that followed, and into the lives of Grant's surviving family and friends.

Michael B. Jordan plays Grant with the same appealing low key charisma and quiet intensity he has lent to several films since, including two more with Coogler (Creed and Black Panther), as we see Grant go about his life.  We see him quarrel and make up with his girlfriend, play with his young daughter, interact with friends, and celebrate New Year's Eve with his family.  These vividly rendered, snapshot scenes move along with a beautiful calm and delight in chronicling the every day, the banal and beautiful, only heightening the huge sense of loss felt at the film's end, the horror coming out of nowhere but nevertheless clearly a result of bad judgement, racial profiling and police brutality. 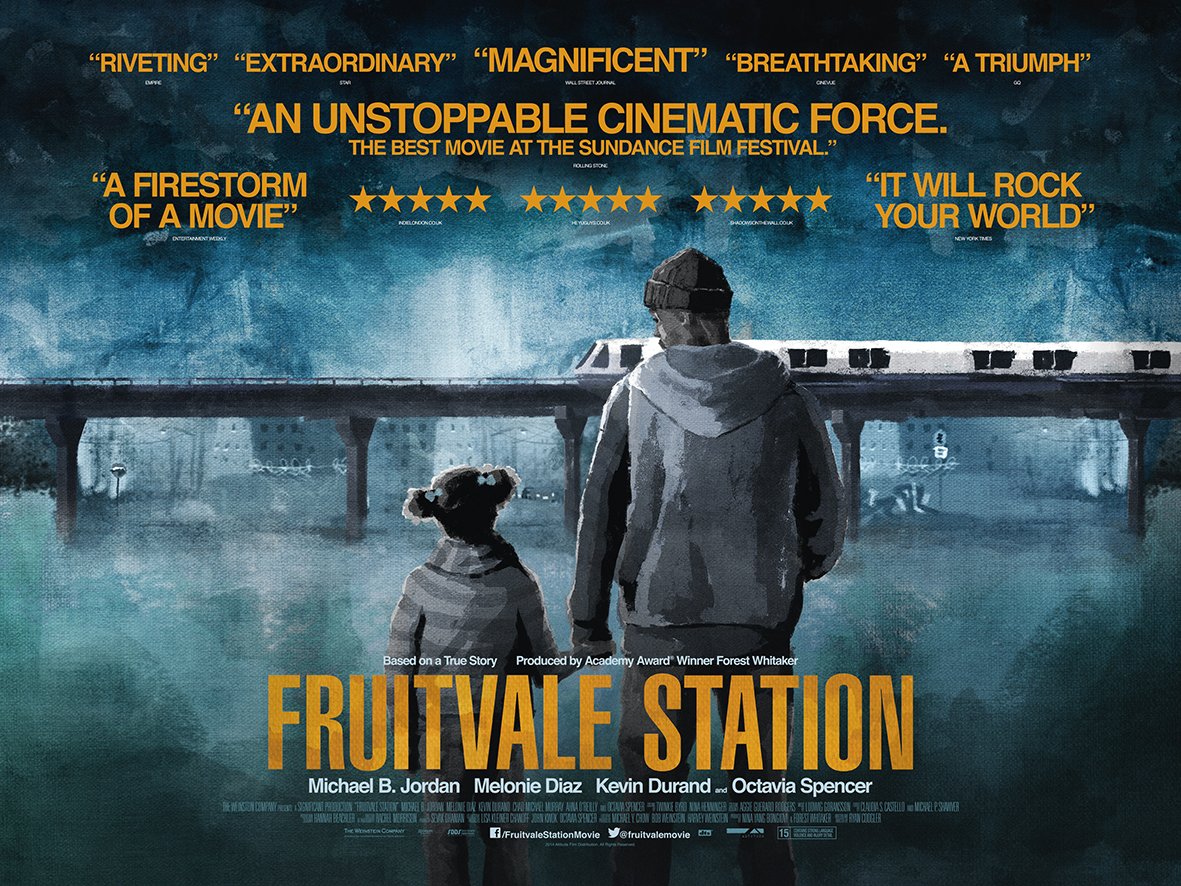 Many films, narrative and documentary alike have been made before and since that reckon with the black working-class experience and its tragically regular convergence with police brutality. Sundance Film Festival hits Blindspotting, Monsters And Men, Sorry To Bother You and The Last Black Man In San Francisco have all touched on the subject in interesting and diverse ways, and are all worth seeking out for their cinematic power, invention and vitality.

But few films have tackled this subject with the low-key social realist urgency of Coogler's.  By focussing on a simple story of everyday life, ended suddenly and shamefully, Fruitvale Station manages to hit right at the heart of this reality. And as the story progresses, day turns to night and the close-up cinematography gets to the heart of Grant's very normal, often joyous life, it is hard not to feel the anguish and sorrow of the filmmakers.  It's palpable in the image and sound.

This is vital, urgent cinema which could not be more resonant with today's world.  But the humanity, empathy and deep sadness of the film and its commitment to lending Grant dignity in death, lasts long after the initial impact of those horrendous pixelated images have played out here or on a computer screen.

Fruitvale Station is available to watch at home now.

The best films of 2018 as voted by Picturehouse Members. Has your favourite made the cut?

As the year draws to a close, our annual staff poll results are in!

Let us know what you think of our new website

You may have noticed that picturehouse.com has changed. We hope you like it! The new website offers a fresh, new design and will make booking easier than ever before.

Few film-makers have ever changed Hollywood as quickly or as profoundly as Quentin Tarantino. Film writer Helen O'Hara gives us a glimpse at the remarkable career of Mr QT himself.