The magic comes to life.

26 years ago, Aladdin first graced cinema screens. Brought to life in beautiful, hand-drawn animation, the Middle Eastern folk tale grossed $500m worldwide, won Academy Awards, was loved by millions and even became a West End musical. Now, Disney has given the classic story a fresh and vibrant makeover, with a brand new live-action version, starring none other than Will Smith.

For the last three decades, Big Will has built a reputation as the most bankable movie star in the business. Now, he's stepping into the shoes of Robin Williams – no mean feat, of course. The late funnyman was iconic as Genie in the 1994 original, and Smith wanted to pay homage to his predecessor, but stamp his own mark, too. "I said to myself, 'What if I just infuse the character with a timeless version of myself?'" Smith told Entertainment Weekly. "And then that opened up for me… hip-hop, it opened up fashion."

In fact, the Genie's style is divided into two distinct looks in the new film. There's ghostly, bright blue Genie, shooting straight out of the magic lamp, and then there's his human form, complete with colourful robe and trademark long ponytail. Both have the wit and boundless energy that make the character so beloved. Comedy is king in Aladdin – and Smith provides plenty of laugh-out-loud moments.

Obviously, a genie needs a master to grant wishes to, and in Mena Massoud (Jack Ryan), Disney has found the perfect Aladdin. Cast just two days before rehearsals began, Massoud confidently embodies the kind-hearted street rat who stumbles upon a chance to realise his deepest desires. One of those is to wed Princess Jasmine, played by Naomi Scott. This is the next step in an exciting career for up-and-coming Scott, known for roles in Power Rangers and sci-fi drama Terra Nova. Her courageous, empowered princess builds on the DNA of the animated version but has a bigger part to play in the story.

There are plenty of old faces in Aladdin, but get ready to meet some new characters, too. Dalia, Jasmine's free-spirited best friend, makes her debut and is played by Saturday Night Live's Nasim Pedrad. Billy Magnussen, meanwhile, steps into the jewel-encrusted boots of Prince Anders, the handsome and arrogant suitor with his eye on the princess. 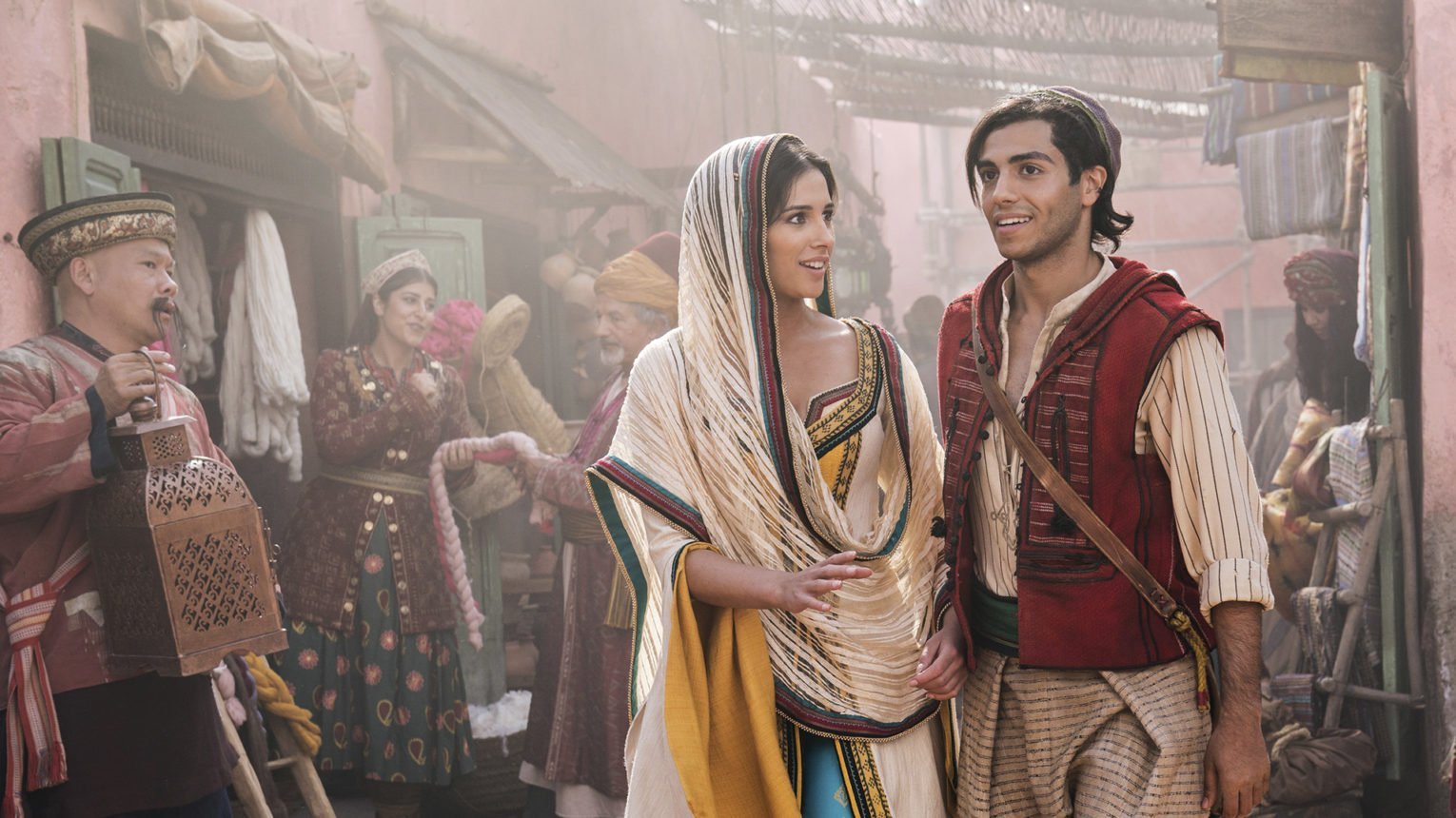 The music, too, has had a makeover. Sure, there are classic tunes, like A Whole New World and Friend Like Me, but each has been rerecorded under the expert eye of Academy Award-winning composer Alan Menken (The Little Mermaid, Beauty And The Beast). Menken – with the help of La La Land songwriters Benj Pasek and Justin Paul – has contributed two new songs to the soundtrack as well.

Disney needed an experienced professional to helm the project. In Guy Ritchie, the studio has bagged itself a director with serious action chops. The film-maker cut his teeth in the late '90s with sweary dramas like Snatch and Lock Stock And Two Smoking Barrels. Since then, Ritchie has continued to develop his knack for a spectacular set-piece with a range of big-budget blockbusters, but could he bring this experience to bear on Aladdin? The answer, of course, is yes. Drenched in colour and loaded with spectacle, the streets of Agrabah have been reimagined for a modern, action-hungry audience. Ritchie has described his Aladdin as a "slightly broader world, a hybrid world". For fans of the original, it's a whole new world to dive into.

Aladdin is out in cinemas on Wednesday.

Book now for Bellé Epoque and enter our competition to be in with a chance of winning a £100 Chanel voucher! T&C's apply.

Sam is joined by Corrina Antrobus, Codie Entwistle and Clare Binns to look back on the cinematic highlights of 2018.

A Decade Of Success

National Theatre Live has gone from success to success in its first decade. There have been more than 80 productions broadcasts, reaching almost nine million people across the globe.

Our Friends | Refuge's Past, Present and Future

Refuge works towards a future where women and children are free from domestic abuse. Picturehouse shares that vision.

Get 2-for-1 on movies at Picturehouses across the land with Meerkat Movies!

We speak to George MacKay and Essie Davis stars of True History Of The Kelly Gang with Director Justin Kurzel.